Mass occurrence of polyploid green frogs (Rana esculenta complex) in Eastern Ukraine
Leo J. Borkin,1 Alexey V. Korshunov,2 Georgiy A. Lada,1,3 Spartak N. Litvinchuk,4 Jury M. Rosanov,4 Dmitry A. Shabanov,2 and Alexander I. Zinenko5
1 Department of Herpetology, Zoological Institute, Russian Academy of Sciences, Universitetskaya nab. 1, St. Petersburg 199034, Russia. E-mail: lacerta@zin.ru
2 Department of Zoology and Animal Ecology, Kharkov National University, Kharkov, Svobody sq., 4, 61077, Ukraine. E-mail: d_sh@list.ru
3 Department of Zoology, Tambov State University, ul. Internatsional’naya, Tambov 392622, Russia. E-mail: esculenta@mail.ru.
4 Institute of Cytology, Russian Academy of Sciences, Tikhoretsky pr. 4, St. Petersburg 194064, Russia. E-mail: slitvinchuk@yahoo.com
5 Museum of Nature, Kharkov National University, Kharkov, Trinkler str. 8, 61022, Ukraine. E-mail: zinenkoa@yahoo.com.
Submitted August 20, 2004.
In eastern Ukraine, the Rana esculenta complex consists of three species: R. lessonae, R. ridibunda, and hybrid R. esculenta. The first one was rare, whereas two latter frog taxa were very common. Based on DNA flow cytometry, mass occurrence of the triploidy in Rana esculenta has been revealed in 14 localities of Kharkov, Donetsk, and Lugansk Provinces. One hybrid specimen from Kharkov Province was tetraploid. All polyploids were recorded along the middle part of Seversky Donets River (above 450 km). Triploids comprised two groups with different genome composition (LLR and LRR), and were found in three types of population systems (E, R–E, and L–E–R). Geographic distribution of polyploidy in European green frogs is briefly outlined. Different methods of ploidy level identification are discussed. The chromosome count and nuclear DNA cytometry provide the most reliable data.
Keywords: hybridogenetic frogs, triploidy, tetraploidy, Rana esculenta complex, DNA flow cytometry, Ukraine.
INTRODUCTION
Three taxa of European green frogs (Rana esculenta complex) are distributed in eastern Europe. These are two “normal” species – the lake frog, Rana ridibunda Pallas, 1771, and the pool frog, R. lessonae Camerano, 1882, as well as the edible frog, R. esculenta Linnaeus, 1758, which arose as a result of hybridization between the former two parental species. The complex exhibits an unusual mode of speciation, characterized by complicated genetic mechanisms, involving hybridization, so-called hemiclonal (or meroclonal) inheritance, polyploidy, unisexual and bisexual population systems of various kinds (e.g., Uzzell et al., 1977, 1980; Borkin et al., 1987; Vinogradov et al., 1988, 1990, 1991; Graf and Polls Pelaz, 1989a; Berger, 1990; Bucci et al., 1990; Günther, 1990; Tunner and Heppich-Tunner, 1991; Hotz et al., 1992; Caune and Borkin, 1993; Lada, 1995; Ragghianti et al., 1995). Rana esculenta is considered to be a klepton (in Greek: thief), a special category of taxa of the species group, the character of which does not coincide with that of the biological species (Dubois and Günther, 1982; Dubois, 1990; Günther, 1991).
Although hybridogenetic frogs (R. esculenta) are widely known across temperate Europe from France in the west to Volga River in the east (Günther, 1997; Borkin et al., 2003a, 2003b), natural triploidy has been recorded in many populations distributed in western and central parts of Europe only (e.g., Günther, 1970, 1975a; Knudsen and Scheel, 1975; Ebendal and Uzzell, 1982; Regnier and Neveu, 1986; Blommers-Schlösser, 1990; Plötner and Klinkhardt, 1992; Tunner and Heppich-Tunner, 1992; Berger and Berger, 1994; Mikulcek and Kotlík, 2001; Ogielska et al., 2001; Rybacki and Berger, 2001).
During two last decades, we examined by means of DNA flow cytometry numerous samples of green frogs from the territory of the former Soviet Union (Fig. 1). However, no record of triploidy in wild populations has not yet been published (Borkin et al., 1987; Vinogradov et al., 1988, 1990, 1991; Caune and Borkin, 1993; Lada et al., 1995; Borkin et al., 2003a, 2003b). An enigmatic tetraploid frog only was evidenced by karyotyping from Latvia (Borkin et al., 1979). An occasional triploid, taken by S. N. Litvinchuk from Kaliningrad Province, the westernmost enclave of Russia situated between Poland and Lithuania, has been mentioned by Borkin (2001).
In this contribution, we present the results of our study on green frogs of eastern Ukraine, obtained mainly on the basis of DNA flow cytometry. The aim of the paper is to give the evidence of mass occurrence of various kinds of polyploid frogs (R. esculenta) in local populations. 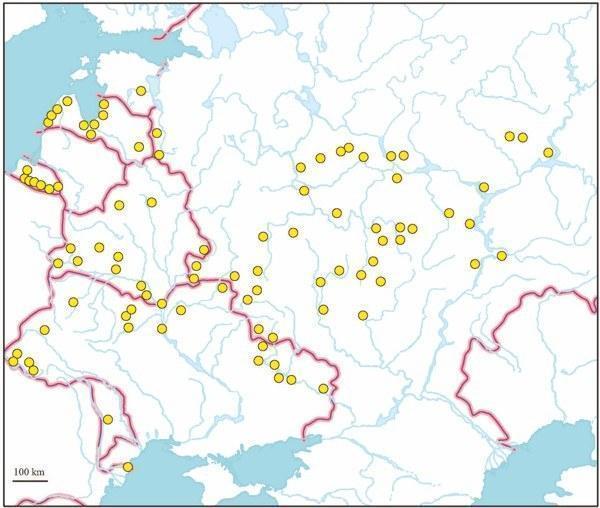 Fig. 1. The distribution of hybrid Rana esculenta in European part of the former Soviet Union (based on genome size data).
MATERIAL AND METHODS
Since 1989, a total of 551 green frogs were collected in eastern Ukraine and examined by DNA flow cytometry. In 1989 we studied 11 specimens from Lopan River, Kharkov City, presented by A. M. Rudik. In June 1995 we sampled 24 frogs from three other localities of Kharkov Province (Zmiyov and Kharkov Districts). In June 1996 we examined 43 specimens from two localities of Zmiyov and Zachepilovka Districts, Kharkov Province, Ukraine.
In 2002 – 2004 our sampling has been more extensive, and 473 frogs were taken from 38 localities of Kharkov, Donetsk, and Lugansk Provinces (Fig. 2, Table 1). The majority of specimens were collected at the “juvenile” stage, which covered both froglets before the first hibernation and subadults. Sex of adults, determined by dissection, and the age composition (juveniles or adults) of samples are represented in Table 1.
The frog catching by G. A. Lada has been selective in 1995 – 1996 and 2003 because he paid his attention to hybrids, and a few representatives of parental species were taken as a control and an evidence for their existence at a locality. However, Kharkov collectors sampled animals randomly, without any preference.
The amount of DNA per nucleus (genome size, in picograms, pg) was measured by DNA flow cytometry. The detals of the technique have been published previously (e.g., Vinogradov et al., 1990; Rosanov and Vinogradov, 1998; Borkin et al., 2001).
Population systems were identified by us using field observations and genome size data as well as, in a few cases, museum collections. Detailed analysis will be published elsewhere.
The species genome structure in frogs and the species composition in population systems are marked by the initial letter of species Latin names, namely: L is lessonae, R is ridibunda, and E is esculenta.
Frog samples are deposited in the collection of the Department of Herpetology, Zoological Institute, Russian Academy of Sciences, St. Petersburg, Russia, as well as in collection of the Museum of Nature, Kharkov National University, Kharkov, Ukraine.
The geographic names are given according to the map of Kharkov Province (Anonym, 1992). 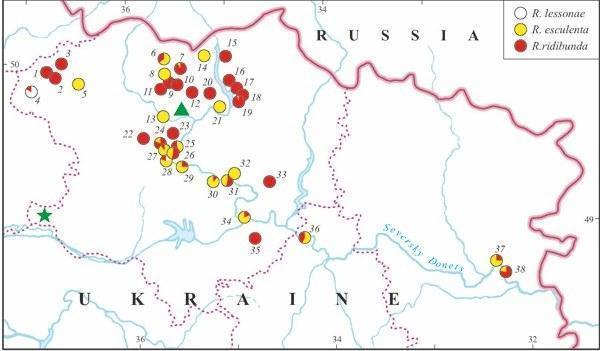 Fig. 2. The distribution of members of the Rana esculenta complex in eastern Ukraine (based on genome size data). The triangle marks the Kharkov City sample with R. ridibunda studied in 1989. The asterisk denominates the Russkii Orchik sample with three frog species studied in 1996.
TABLE 1. Genome Size Variation (in picograms) in Green Frogs collected from Eastern Ukraine in 2002 – 2004 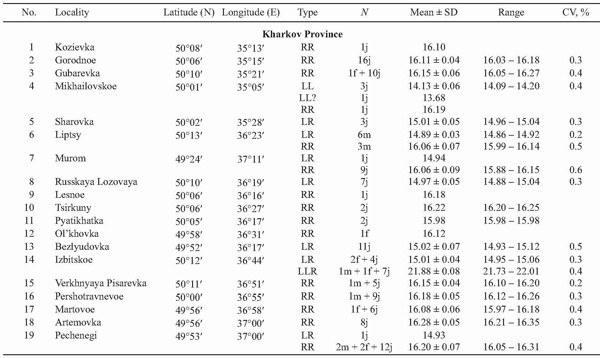 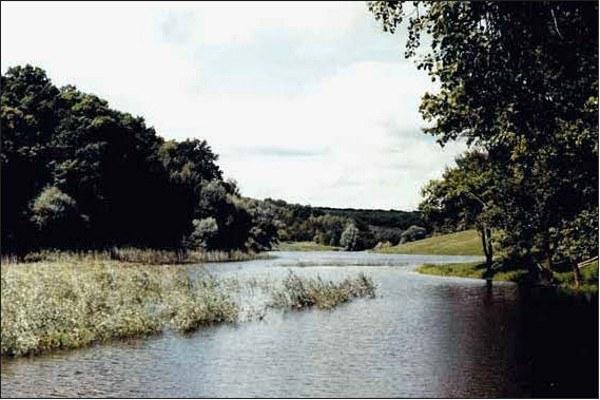 Fig. 3. Iskov Pond in the environs of the settlement Gaidary. The habitat of diploid and triploid Rana esculenta as well as R. ridibunda. Photo by Alexey V. Korshunov.
RESULTS
Species Genome Composition in Hybrids
According to genome size data, eleven water frogs of the first sample (1989) from Kharkov City (Fig. 2: marked by triangular) proved to belong to R. ridibunda.
Twenty four specimens taken from three localities in Kharkov Province (1995) were identified as R. esculenta. Five and 15 hybrids were collected from a pond in Koryakov Yar and from Iskov Pond (Fig. 3), respectively; both sites are situated in the environs of the settlement Gaidary (Fig. 2: the locality 26). Four frogs were captured in ponds of Ol'khovaya Balka Point, situated between villages Borshchevaya and Russkaya Lozovaya (Fig. 2, 8). All hybrids were diploid.
Another sample from Iskov Pond examined in 1996, contained R. esculenta and one male R. ridibunda, as it was evidenced by DNA flow cytometry. Among 36 hy- brids, we distinguished two groups: 35 diploids and one triploid (RRL).
Animals collected in 1996 from Russkii Orchik Point (Fig. 2, marked by asterisk), Zachepilovka District, contained representatives of three green frog species, namely: R. ridibunda (1), R. lessonae (1), and R. esculenta (4 diploids).
Thus, our preliminary studies made in 1989–1996 obviously indicated the occurrence of three members of the Rana esculenta complex in Kharkov Province, with numerous hybrids, including one triploid. These data did not included in Tables 1 – 4, since the nuclear DNA content was measured by DNA flow cytometry, with the use of different dye in comparison with our subsequent treatment, and because of different periods of sampling.
In 2002 – 2004 based on significantly more extensive sampling in three provinces of eastern Ukraine (473 specimens), we revealed six groups of animals expressed by different peaks on the DNA histogram (Fig. 4). We identified them as three members of the R. esculenta complex, namely: two parental species R. lessonae and R. ridibunda, and their hybrid R. esculenta (Tables 1–4).
The parental species were represented mostly by R. ridibunda (220 individuals or 46%), which had genome size values ranging from 15.74 to 16.35 pg. Only five specimens (or 1%) were reliably allocated to R. lessonae: their amount of nuclear DNA varied between 13.97 and 14.20 pg. Furthermore, one specimen from Mikhailovskoe (Fig. 2, 4), most likely, belonging to the same species, had lower amount of nuclear DNA in comparison with other R. lessonae (Tables 1 and 2). The ranges of genome size variation in both species did not overlap (Fig. 4, Table 2), and differences between averaged values reached 13.6%. 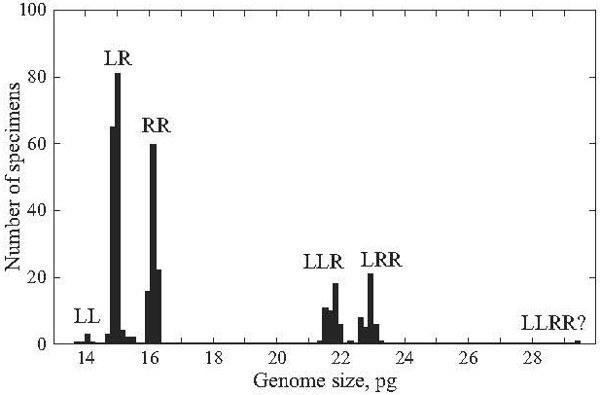 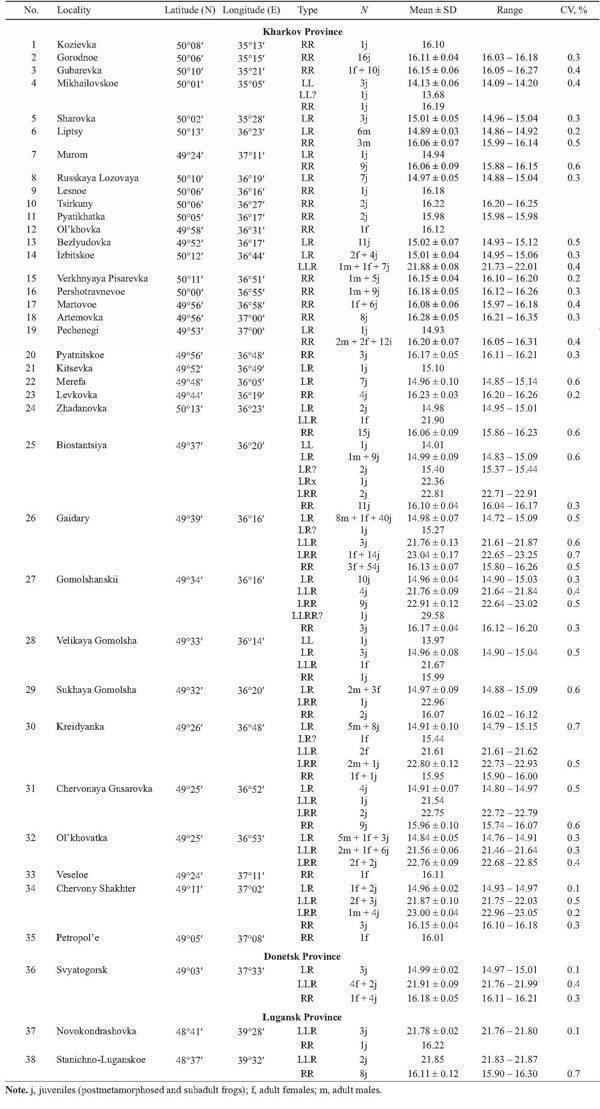 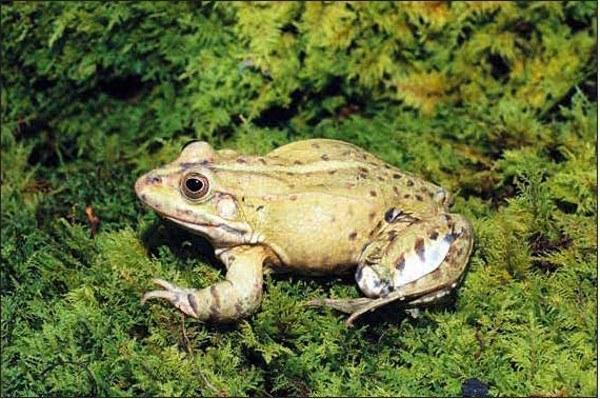 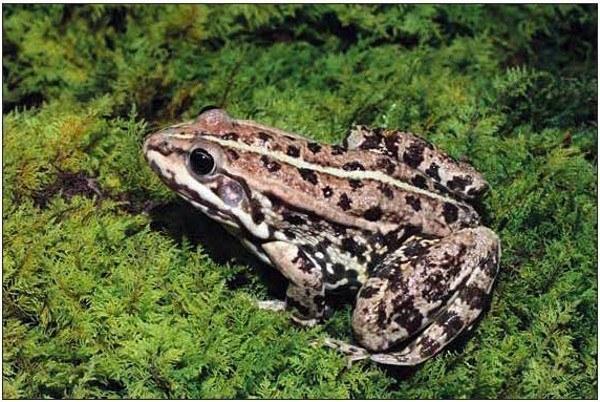 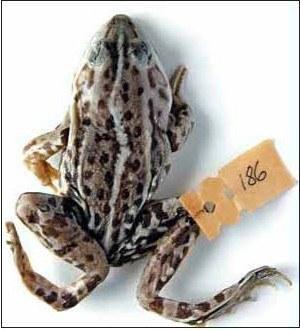 Fig. 7. A triploid female of R. esculenta with the LLR genome composition from Kreidyanka, Kharkov Province. Photo by Dmitry A. Shabanov and Alexey V. Korshunov. 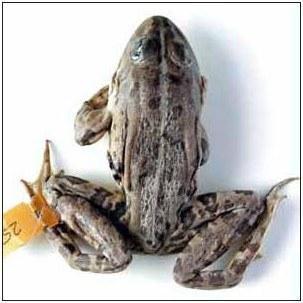 Fig. 8. A triploid male of R. esculenta with the LRR genome composition from Kreidyanka, Kharkov Province. Photo by Dmitry A. Shabanov and Alexey V. Korshunov.
Green Frog Composition in Localities
The majority of localities, examined in 2002 – 2004, under the study was inhabited by R. ridibunda or, in lesser extent, by R. esculenta, whereas R. lessonae was recorded in three localities only, 8% (Fig. 2, Tables 1 and 3). Formerly, in 1996, the latter species was found in Russkii Orchik as well (Fig. 2). Twenty two localities were shared by two or three species of green frogs. We also found one locality (Mikhailovskoe) where both parental species were recorded together without hybrids. However, we could suggest that such system existed in other locality as well (Gorodnoe). Our samples from this locality, examined by DNA flow cytometry, were represented by R. ridibunda only. Nevertheless, we identified another species, R. lessonae, in the collection of the Museum of Nature, Kharkov University. In contrast, R. esculenta coexisted with R. ridibunda in 13 localities, whereas the occurrence of all members of the R. esculenta complex in the same localities was registered in two cases (Table 1). Moreover, all three members of the complex were recorded in Russkii Orchik (Fig. 2). Some localities (larger samples with ten or more specimens) were represented by one species only: either by R. ridibunda (3 cases) or by R. esculenta (3 cases).
Triploids were found in 14 localities (37%) of Kharkov, Donetsk, and Lugansk Provinces (Fig. 9). Their occurrence was associated with R. ridibunda in 11 cases, whereas both parental species coexisted with triploids in two localities only (Biostantsiya and Velikaya Gomolsha — Fig. 10; Tables 1 and 4). Samples from two localities (Bezlyudovka and Izbitskoe) contained diploid and triploid hybrids only, without any parental species.
Unlike diploid R. esculenta, triploids were recorded along the middle part of Seversky Donets River only. The most distant localities with triploids were separated by the distance of above 450 km (from Izbitskoe village to Stanichno-Luganskoe village — Fig. 9).
A tetraploid frog was found in the locality Gomolshanskii, Kharkov Province (Fig. 9, Table 1 and 4) where both kinds of triploids co-existed with parental species.
Triploid Genom Structure and Population Systems
Triploids of the LLR composition only were revealed in three types of population systems (Table 4), namely: in the E type (for instance, Izbitskoe), the R-E type (for instance, Svyatogorsk, Novokondrashovka, and Stanichno-Luganskoe), as well as in the L-E-R type (for instance, Velikaya Gomolsha).
Triploids with the LRR genome structure only were found in the L-E-R type of population systems (Biostantsiya and Sukhaya Gomolsha — Table 4).
Both kinds of triploids together were revealed in two types of population systems (Table 4). These were mixed populations of the R-E type (for instance, Kreidyanka — Fig. 11, and Ol'khovatka) and the L-E-R type (for instance, Gaidary).
TABLE 3. Frequency of Green Frog Species in Localities of Eastern Ukraine (population systems are based on field, museum and genome size data) 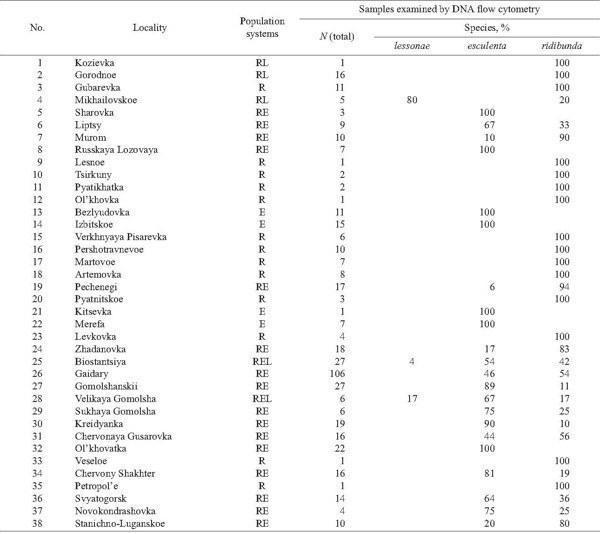 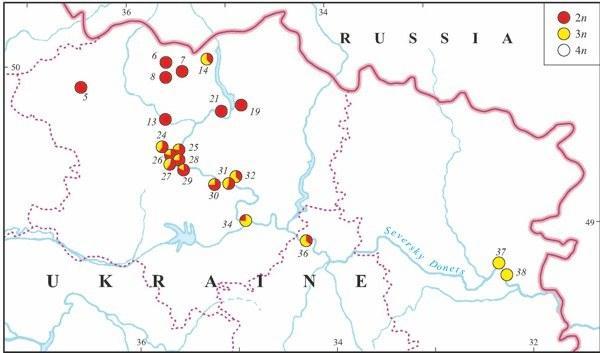 Fig. 9. The distribution of diploid and polyploid hybrids in eastern Ukraine (based on genome size data).
TABLE 4. Incidence of Diploid and Triploid Hybrids in Localities of Eastern Ukraine 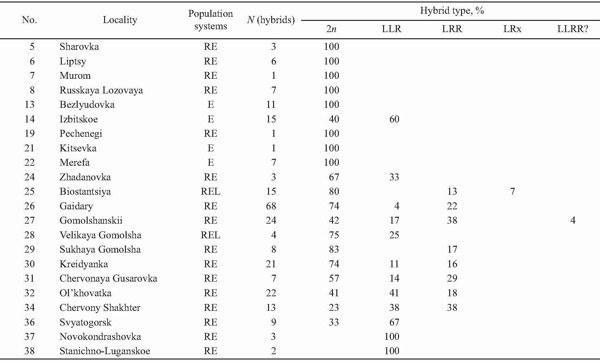 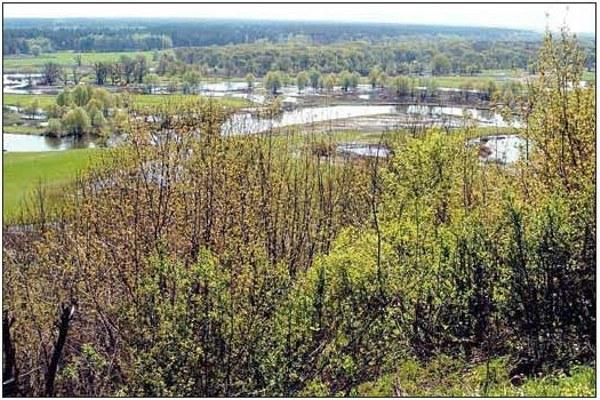 Fig. 10. A floodplain of Seversky Donets River near Biostantsiya. The locality was inhabited by Rana lessonae (occasional), R. ridibunda, and R. esculenta. Hybrids were represented by both diploids and triploids (LLR and LRR). Photo by Dmitry A. Shabanov. 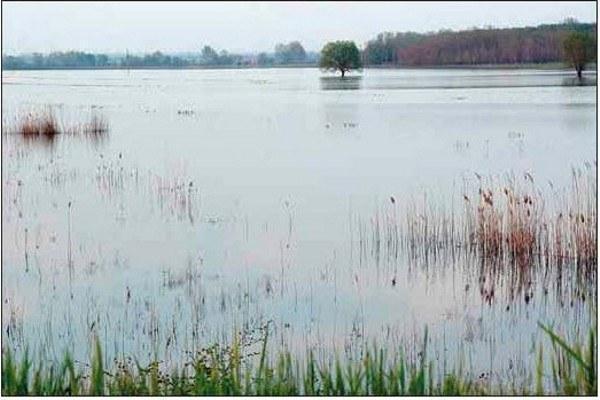 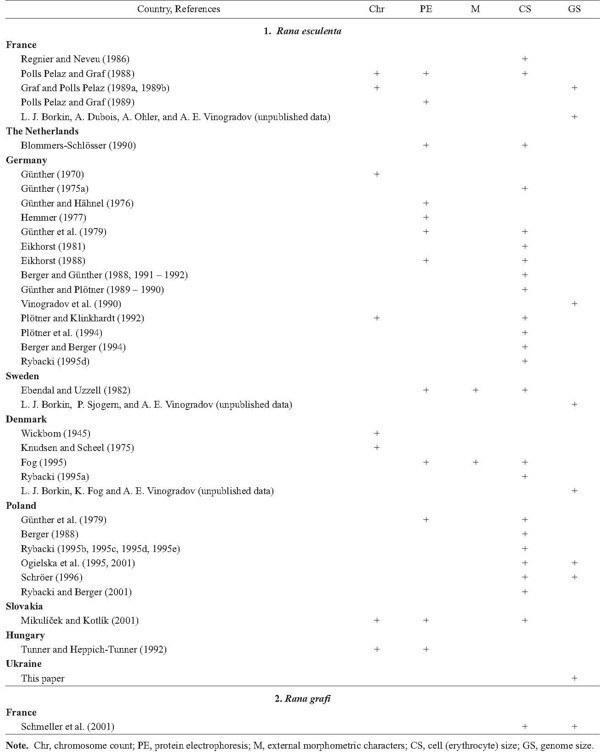